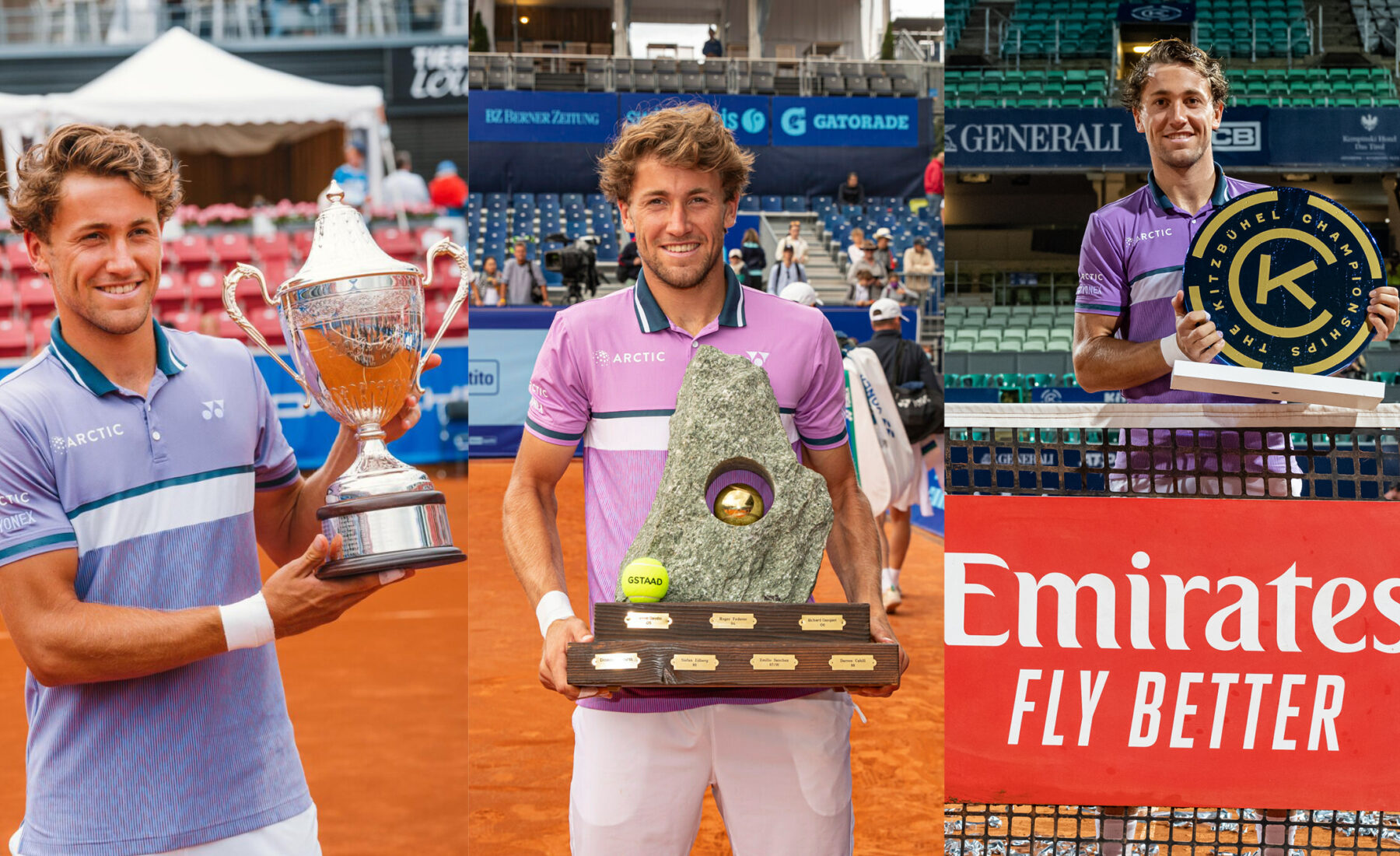 For the first time since 2011 a player manges to win 3 consecutive ATP titles in 3 weeks and that player is Casper Ruud.

An incredible achievement and a series of victories that starts in Båstad.

Casper is the top seed in Båstad ATP 250 and is as close to home as possible in Båstad. A tournament the whole family has long traditions with because his father Christian played the finals here in 1995. Casper´s goal was to get Ruud up on the wall since his father did not manage to when he lost the final in 95.

Casper beats Holger Runein the first match, gets a WO in the second against Laaksonen, and he beats Carballes Baena in the semis. In the final he wins 6-3-6-3 against Coria who knocked out the top seed, Garin in the quarterfinal.

A fantastic feeling for a Norwegian to play and win the Nordea Open in Båstad.

Directly from Båstad, the trip continued to Gstaad and a new ATP 250.

In Gstaad Shapovalov and Casper are the to top seeds and the conditions are very different from Båstad. This is because the venue in Gstaad is located at an altitude of about 1100 m.

Casper adjusts quickly, has a bye in the first round and is ready for Novak in the second round. This is a tough match where serve and return plays å big role. Casper eventually wins 6-4 7-6 and in the quarterfinal awaits Benoit Paire. As always it is challenging to play against Paire who has many tools in his box.

Casper wins a tough trhee-set match and moves on to the semis against Kopriva. Kopriva being the guy who qualified and knocked out Shapovalov in the second round. Casper was well prepared with a good analysis of the opponent and wins the match 6-3 6-0.

In the final, Hugo Gaston is waiting. Gaston has many good wins on the way to the final, beating Delbonis, Garin and Djere. Again, Casper is well prepared for what awaits him and executes his gameplan very well. The score 6-3 6.2 for Casper does not reflect the game as there were many very tough and even games. With this win Casper collects his second title in two weeks.

Again we changed venues directly from Gstaad to Kitzbühel for the last ATP 250 on clay.

In Kitzbühel the venue is also located in altitude at approx 750 m. A beautiful venue with the famous Hahnenkamm right next to it.

Casper has played Kitzbühel before and likes the conditions. But with two tournament victories and many matches in a short time, the team was excited to see if he could manage one more week and another title.

Casper has a bye in the first round and plays Martinez in the second round. A tough and aggressive opponent. Casper digs deep and gets the win 7-5 5-7 6-4. In the next round, the swede Ymer, whom Casper knows well from his junior years, is waiting. Ymer starts out in full speed and plays solid and good tennis with quick feet. It develops into a special match where Ymer has the chance to serve it home twice in the second set, but again Casper digs deep and doesn´t give up. He saves a match point and then wins the match in three sets. An effort that gives Casper confidence and a place in the semifinal.

Here awaits a big serving Frenchman, Rinderknech. Casper manages to break him in the first set 6-3 and then take the second set on a tiebreak 7-6 and Casper is set for the final.

Weather challenges makes the final a difficult mental game as well as a physical one. The players have to leave the court twice during the match and the match stretches out almost 5 hours.

Casper has in the back of his mind that he can make history with three titles in three weeks and thoughts go through his head. He manages to pull off the victory with a 6-1 4-6 6-3 win and can cheer for a third title in as many weeks.